2013-11. Wartime Victims exhumed from former Military Base return to Pambach 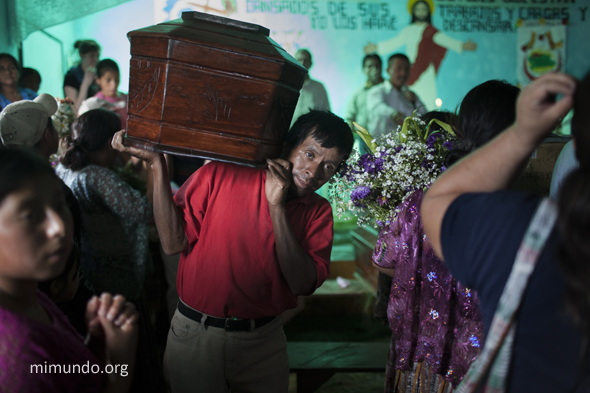 On Friday November 22nd, 2013, members of the Guatemalan Forensic Anthropology Foundation (FAFG) returned the skeletal remains of six positively identified male wartime victims to their appropriate families in the Poqomchi’ Mayan hamlet of Pambach, 38 kilometers from Cobán. All six men were taken by the army after a military incursion to the village on June 3rd, 1982, during the de facto government of Efraín Ríos Montt, and were never seen again. 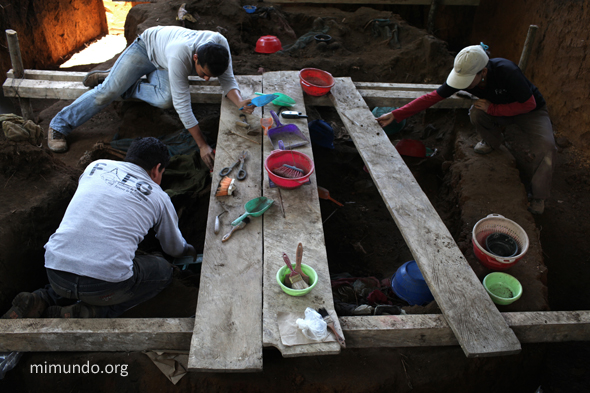 The remains of the six wartime victims were exhumed from mass grave 17 of the Regional Command of Training and Peacekeeping Operations (CREOMPAZ), formerly known as Military Zone 21 in Cobán. Here, forensic anthropologists Gerson Martínez (left), Ramiro Martínez (center) and Selket Callejas, exhume mass grave 17 on May 29, 2012. 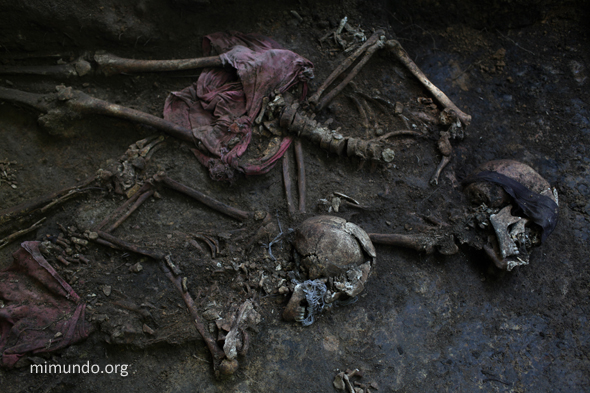 A total of 64 skeletal remains were recovered from grave 17, the majority of which bore evidence of violence such as blindfolds and bound hands and feet. 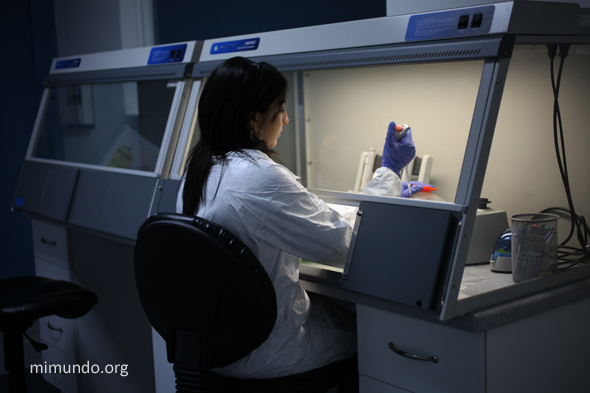 The positive identifications were made possible through DNA samples taken from family members in the community and processed at FAFG’s own DNA lab in Guatemala City – the only one of it’s kind in the region. The DNA lab, which has been operating since late 2010, has now rendered the positive identification of dozens of wartime victims from numerous regions. “The Forensic Genetics Laboratory was conceived following the models and experiences of the International Commission on Missing Persons (ICMP) in Bosnia, and the technology developed to identify the victims of the World Trade Center (WTC) terrorist attacks.” (1) 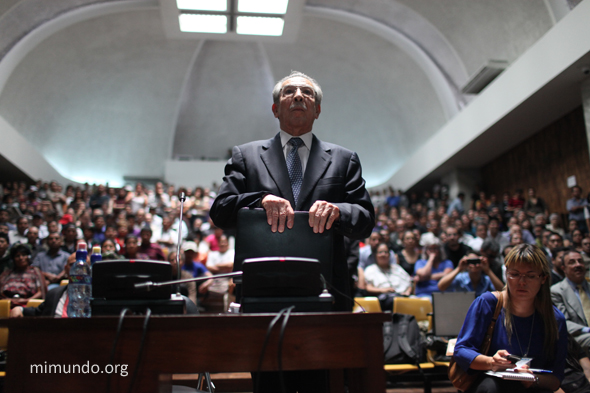 According to the Historical Clarification Commission’s report, on June 3rd, 1982, the army entered Pambach and forcibly captured 60 young men from the hamlet arguing forced conscription. Three days later, all but sole survivor Francisco Caal Jalal were brutally killed with machetes near the town of Tactic by members of the army. (2)

This massacre occurred during the de facto government of general Efraín Ríos Montt. On May 10th, 2013, Ríos Montt was convicted of genocide and crimes against humanity against the Ixil Mayan people, and was sentenced to 80 years imprisonment. Ten days later, the Constitutional Court of Guatemala overturned the conviction. A conclusion or retrial to the genocide case, first of its kind in the world, remains uncertain. 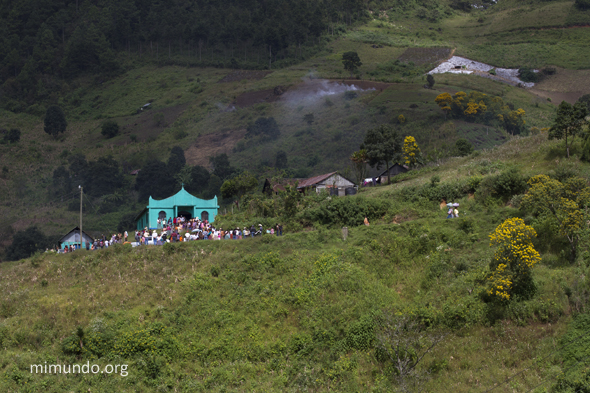 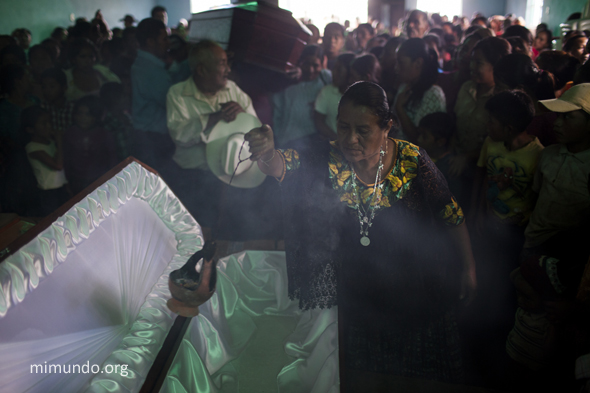 A woman waves incense as the coffins and boxes with the skeletal remains are brought inside the church. 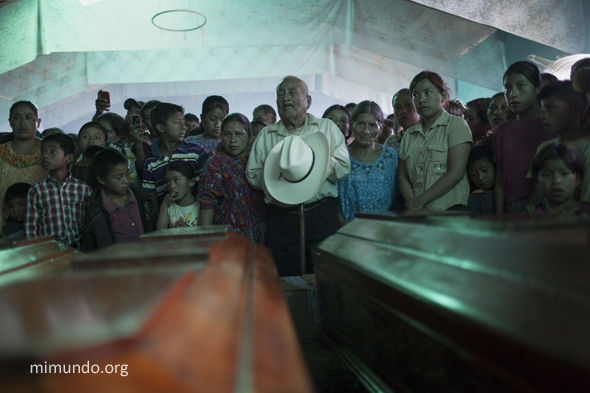 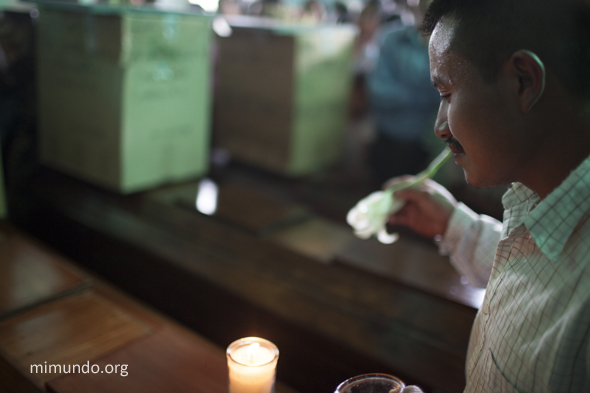 A local clergyman sprinkles holy water on the coffins. 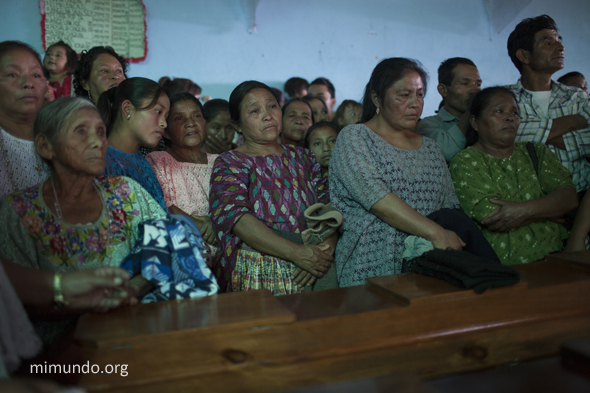 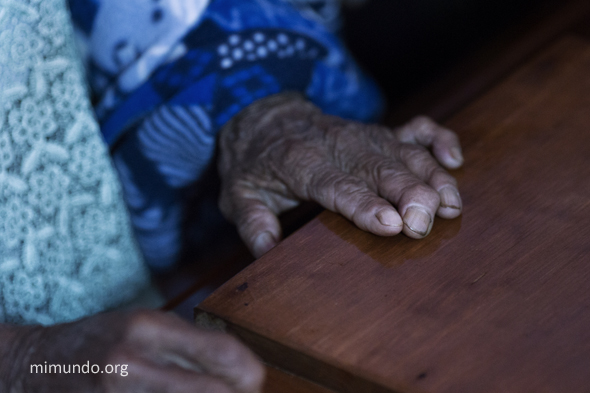 Matilde Dometila Ja Chiquin places her hands on a coffin before receiving the skeletal remains of her son Santiago Jalai Ja. 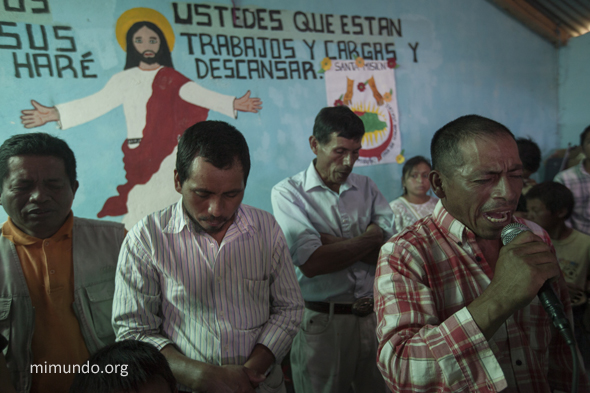 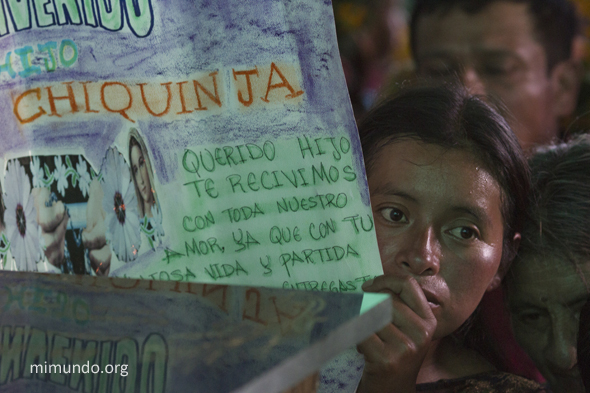 Olivia Chiquin Ja, 28, sister of wartime victim Baldomero Chiquin Ja, holds a sign that reads: “Dear son, we welcome you with all our love, as with your valuable life and subsequent departure for heaven, you offered your life so there could be peace in our country.” 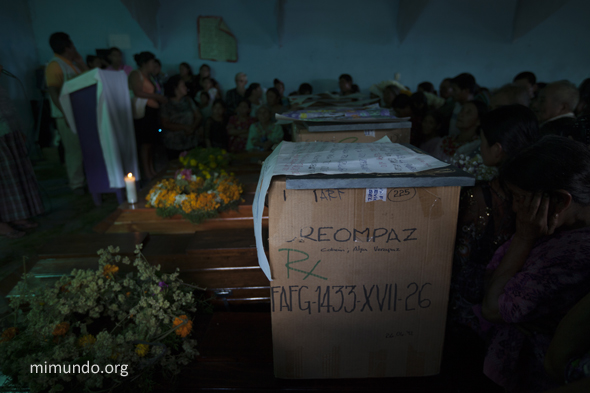 The boxes with the skeletal remains, as they are brought by the FAFG, sit on top of the empty coffins before the family members take them home. 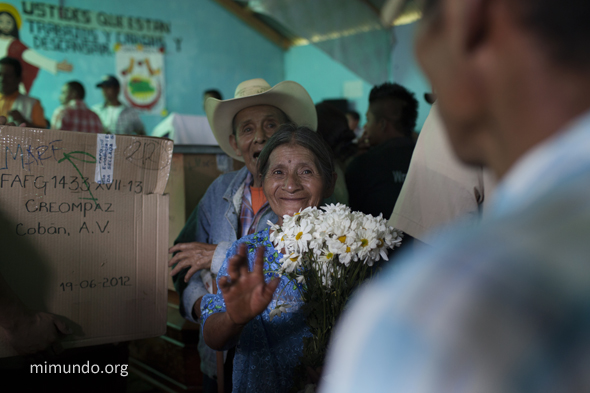 Isabela Ja (forefront) and her husband Celso Chiquin, smile after receiving the skeletal remains of their son Baldomero Chiquin Ja. 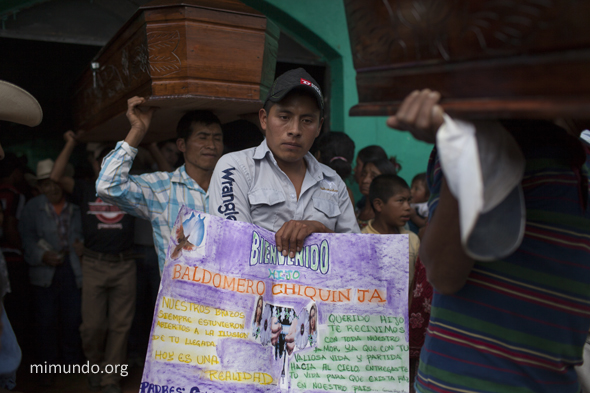 A relative of wartime victim Baldomero Chiquin Ja holds a sign that reads: “Welcome son. Our arms have always been open hoping for your arrival. Today this is a reality.” 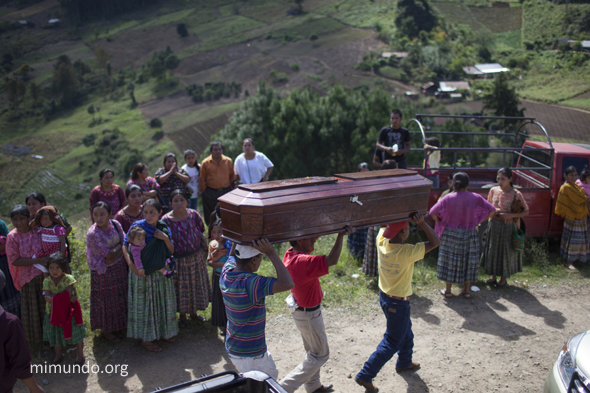 Local men carry a coffin home where they will hold a vigil before burying the remains. 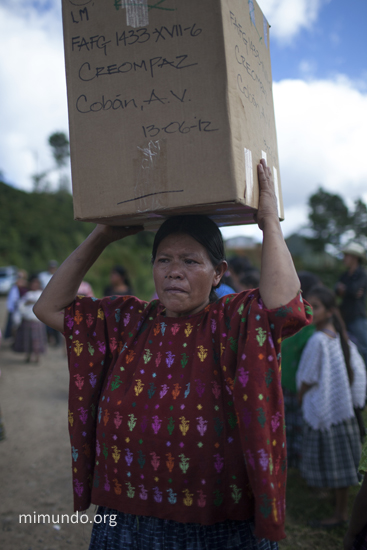 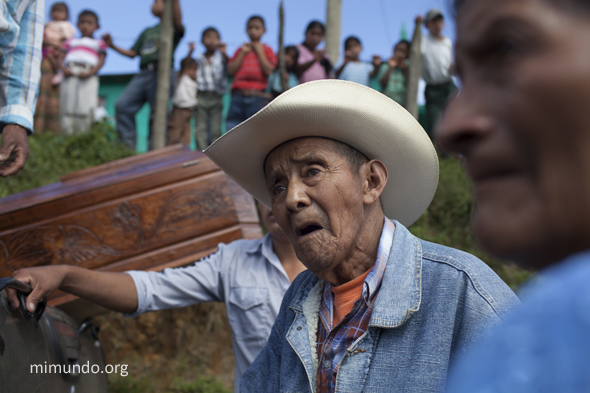 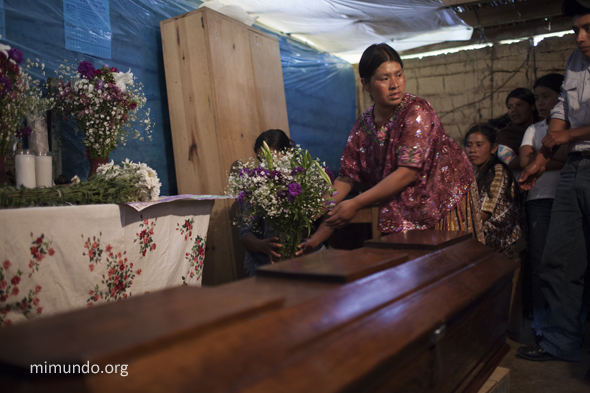 A woman arranges flowers near the coffin where the skeletal remains of Baldomero Chiquin Ja will be laid to rest. 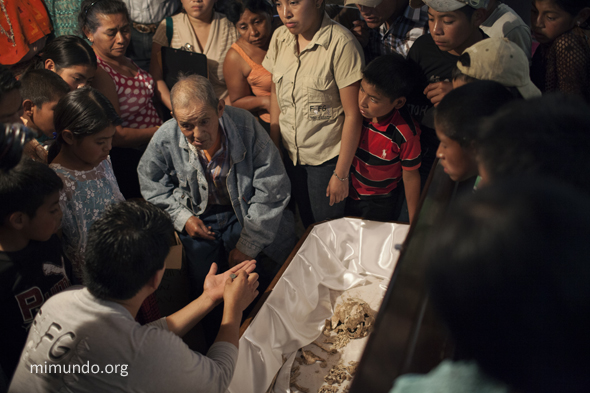 After arranging the skeletal remains in the coffin, forensic anthropologist Freddy Muñoz shows Celso Chiquin a coin found with the remains of his son Baldomero. 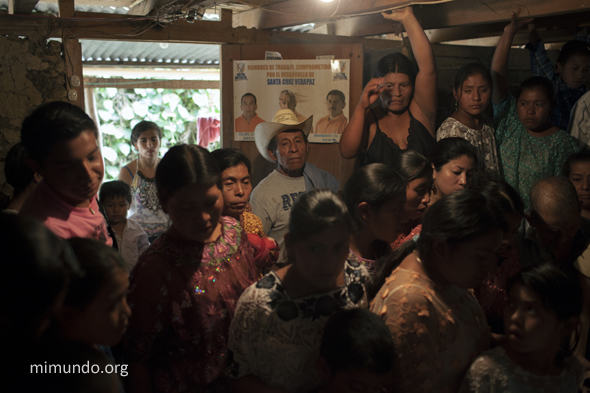 Family and neighbors gather at the Chiquin Ja household.

Friends and family members pray over the skeletal remains of Santiago Jalai Ja at his family’s home. 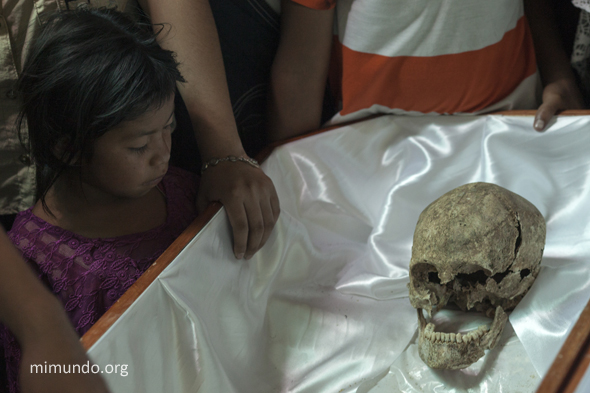 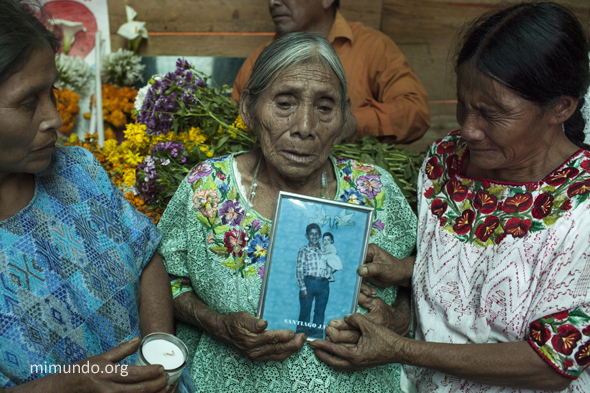 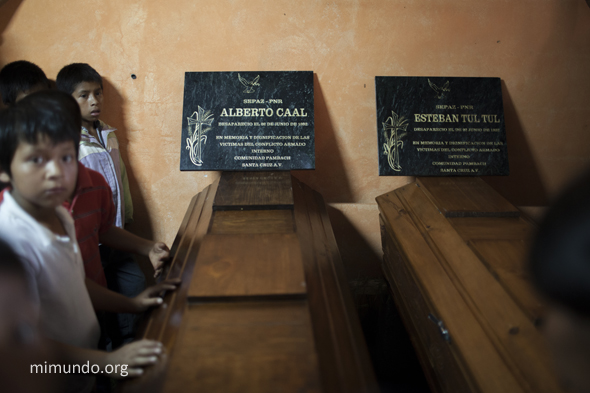 Tombstones are placed above the coffins of wartime victims Alberto Caal and Esteban Tul Tul as friends and family bereave them.

7 thoughts on “2013-11. Wartime Victims exhumed from former Military Base return to Pambach”