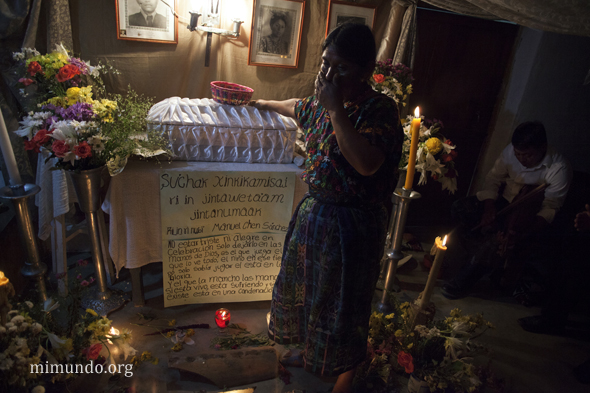 On May 14th, 1982, Carmen Sanchez Chen left her three-year-old son Manuel with a neighbor as she went to bathe in the Chixoy River. Two months had already passed since Guatemalan soldiers and Civil Patrolmen from neighboring Xococ had brutally massacred 177 women and children in her village of Rio Negro.

Guatemala’s civil war, ongoing since 1960, was at its climax in 1982 when U.S.-trained military general Efrain Rios Montt gained power via a coup d’état. Rios Montt vowed to squash the leftist guerrillas by applying Scorched Earth campaigns. The theory was simple: without a support base, the guerrillas could not operate. Hence, all communities identified as sympathetic or in collaboration with a guerrilla were now deemed an internal enemy. According to the United Nations Truth Commission released three years after the 1996 Peace Accords, the conflict killed over 200,000 civilians, mostly indigenous Mayans, while the Guatemalan Military carried out over 400 massacres, some of which constituted “acts of genocide”. 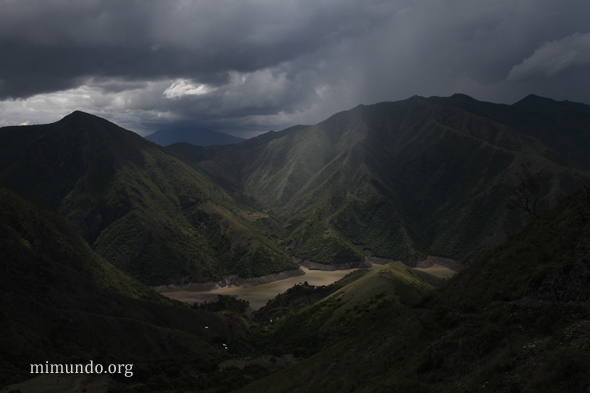 On January 1976, General Kjell Laugerud, former President of Guatemala, signed the first loan accord with the Inter-American Development Bank (IADB) for the construction of the Pueblo Viejo-Quixal hydroelectric plant. To be inaugurated in 1983, the project proposed flooding 31 miles (or 50 kilometers) of the Chixoy River basin and much of its valley, therefore permanently disappearing 23 villages, 45 archaeological sites, and numerous crop areas.

With a rough population of 800 people in 1982, Rio Negro was one of the 23 villages to be flooded out. As local leaders clearly stated the community’s refusal to relocate, the Guatemalan military tagged them as subversives – a death sentence that served as warning for neighboring communities. By the end of 1982, over half of the population of Rio Negro had been killed in five different massacres carried out by the Army and Civil Patrolmen. The Chixoy hydroelectric project was completed in November 1983. 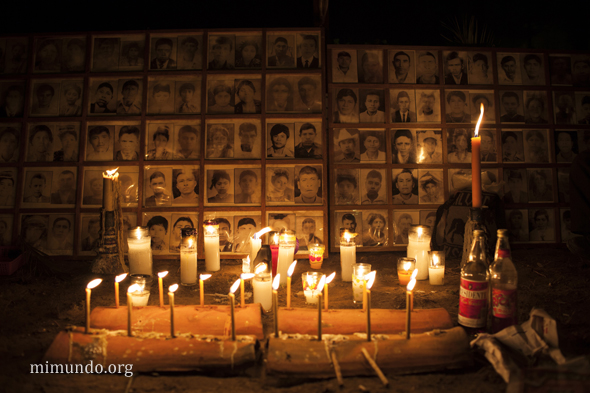 Carmen and her husband Bernardo, both Achi Mayans, left Rio Negro three months prior in February 1982 and were now living with other survivors and refugees from their village in the downriver community of Los Encuentros. “What could happen?” she thought to herself while walking to the river and looking back to check on Manuel.

As Carmen bathed, explosions, gunfire and screams deafened her. Mayhem ensued, Carmen swam across the river, hid behind a tree, and before fainting she witnessed an army helicopter taking numerous people – including her neighbor Margarita and her son Manuel. After the dust settled, the toll from the latest massacre against the people of Rio Negro was 79 dead and dozens missing. 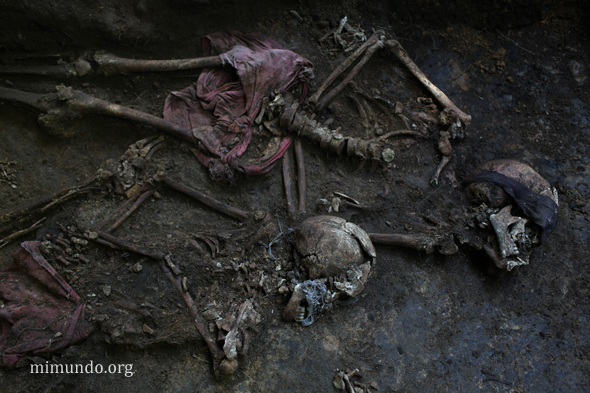 After DNA tests were carried out, Manuel was positively identified as one of the children from mass grave number 15. 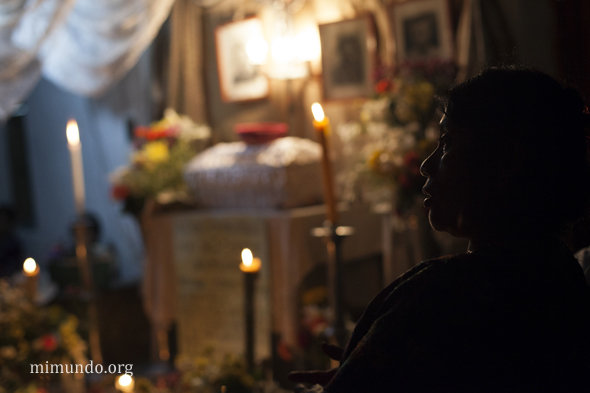 On May 14, 2014, Carmen and Bernardo held a wake for their eldest son Manuel in their home. For over two decades they have lived in the resettlement village of Pacux, outside Rabinal, where survivors from Rio Negro were eventually relocated after the destruction of their village and the flooding of the Chixoy river basin. 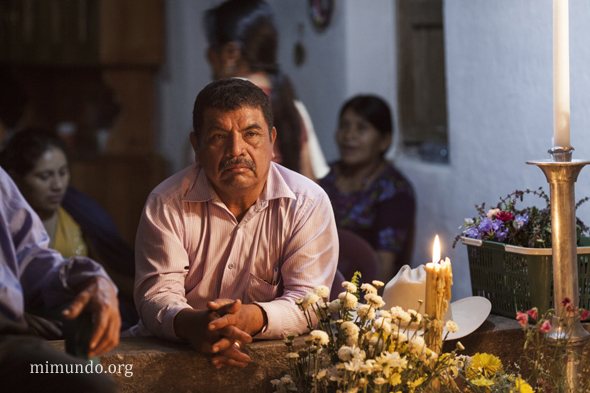 Carlos Chen, who lost his wife and two children in one of the Rio Negro massacres, states: “Yesterday, the Congress passed a decree stating there was no genocide in Guatemala. So we ask, who killed him then?” Mr. Chen is the principal negotiator for the Coordinating Committee of the Communities Affected by the Chixoy Dam (COCAICH), a coalition of flooded communities who still hope to get reparations for the disappearance of their territories in the early 1980s. 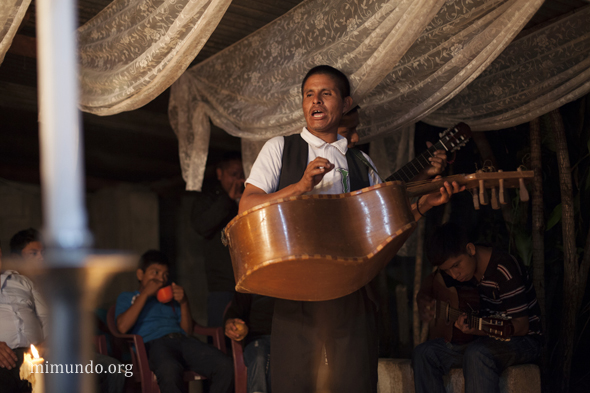 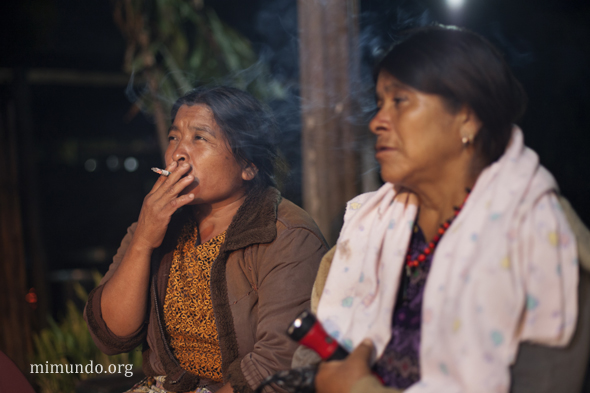 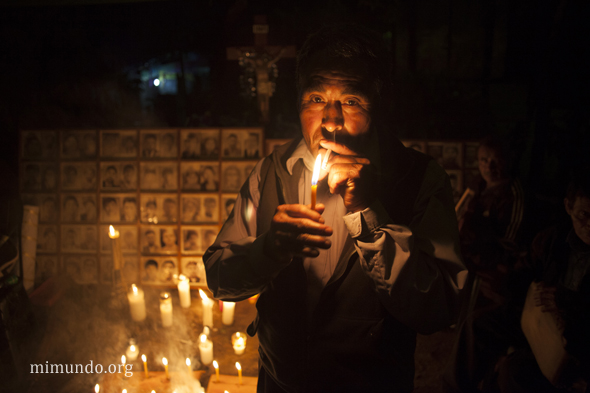 Carmen and Bernardo purposely held Manuel’s wake the same night when the rest of community members from Pacux held a Christian syncretic commemoration for the 32nd anniversary of the Los Encuentros massacre. Juan Manuel Jeronimo, survivor from the Plan de Sanchez community, participated in solidarity as a spiritual guide. 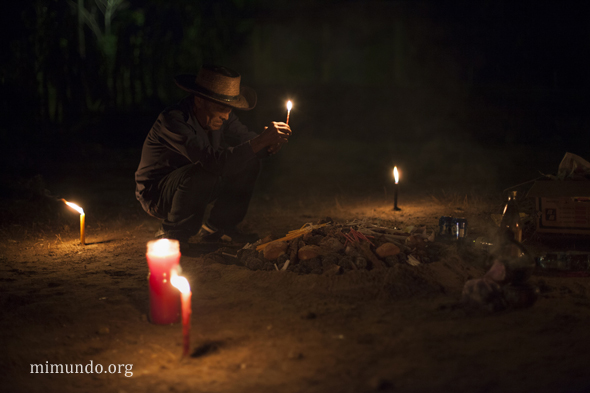 Juan Chen, 80, survivor from Rio Negro, holds a candle as he prepares to carry out a Mayan ceremony next to the images of the victims. 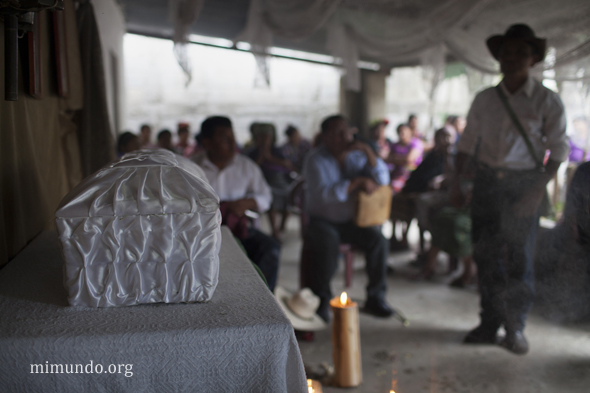 On the morning of May 15, 2014, Bernardo Chen (right), stares at his son Manuel Chen Sanchez’s casket before heading to the cemetery. 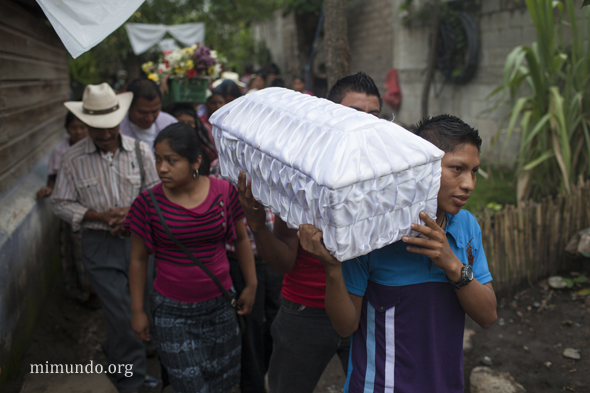 Daniel Martin Chen Sanchez, 18, carries the casket of his eldest brother Manuel, whom he never met. 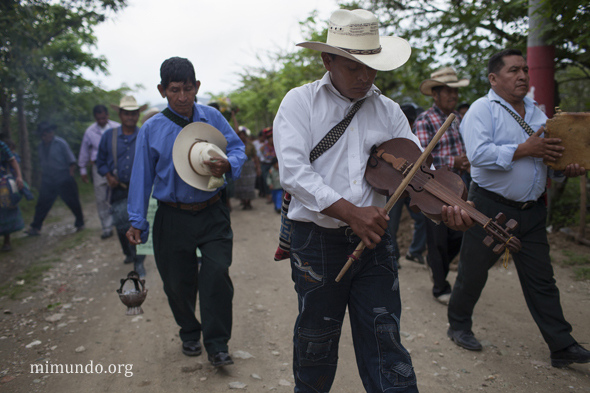 Raul Piox, 29, plays a violin ahead of the funeral procession as locals from Pacux walk to Rabinal’s cemetery. 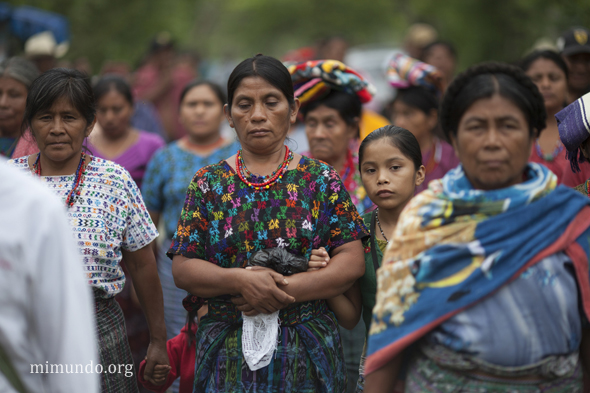 Carmen Sanchez walks in the funeral procession for her son Manuel while one of her younger daughters holds her arm. 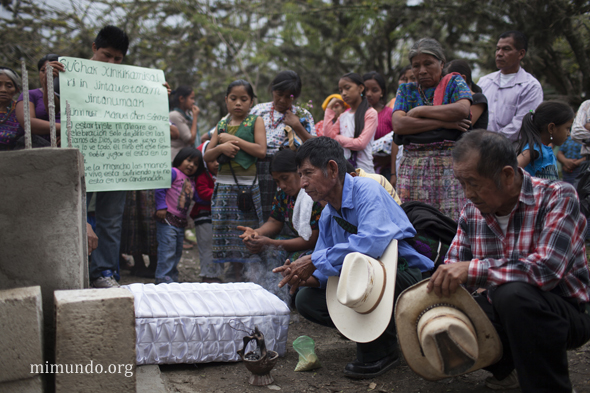 Simón Tecú Cortez (in blue) leads a prayer before Manuel’s remains are placed inside his grave. 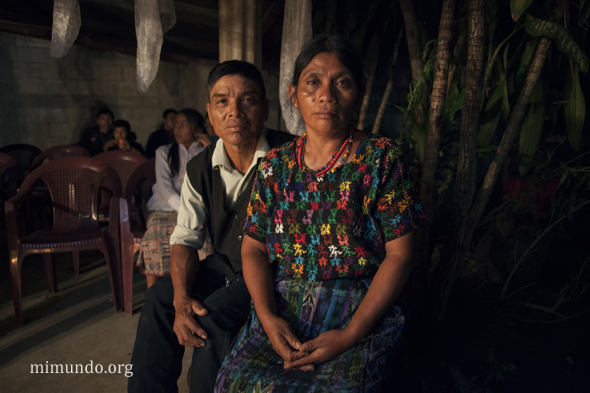 Exactly thirty-two years after they lost their eldest son during the chaos of a massacre, Carmen and Bernardo were finally able to mourn and bury Manuel – an eternal three-year-old. Carmen states: “I often wondered if someday he would walk in, all grown up. I don’t think I would have recognized him anyways, but I always would wonder. Now, at least, I have a place to go visit him and take him flowers.”

This photo essay was made possible with the logistical support of Rights Action and the Department of Geography from the University of Northern British Columbia (UNBC) in Canada.