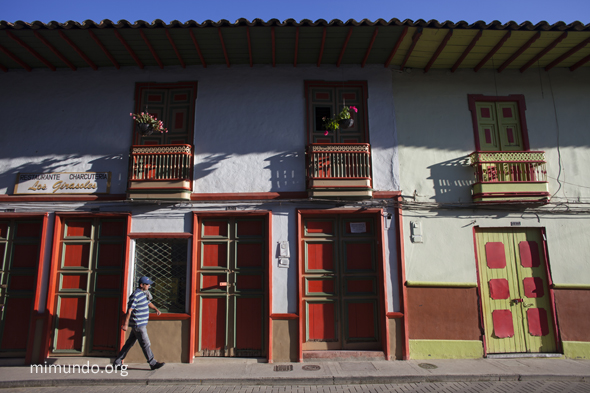 On February 2011, an article in Canada’s Business Financial Post declared: “Colombia, whose rich gold deposits were once the source of the Spanish Empire’s power, is hot again… Seemingly overnight, its nearly dormant gold-mining industry has stirred to life, and the country has become a mecca for junior miners searching for the next big find.” (1)

Today, roughly 90% of the territory in the mountainous department of Antioquia has been licensed primarily for metal mining exploration. Despite ongoing peace talks attempting to end a brutal internal armed conflict spanning over 50 years, the new gold rush is dangerously fracturing new social divisions in a fragile State. (2) 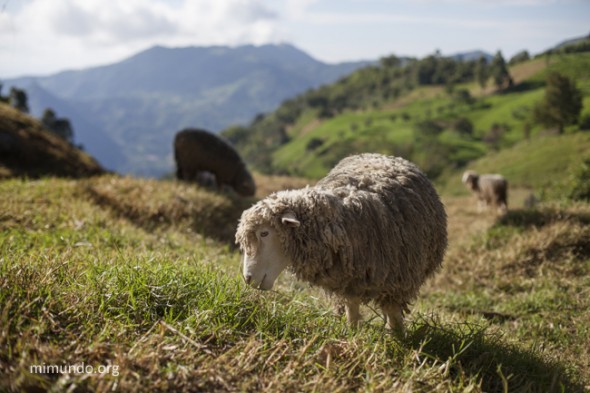 The new gold rush has arrived seemingly overnight in southwest Antioquia, a traditionally agricultural region that has thrived from the production of coffee and livestock for generations. 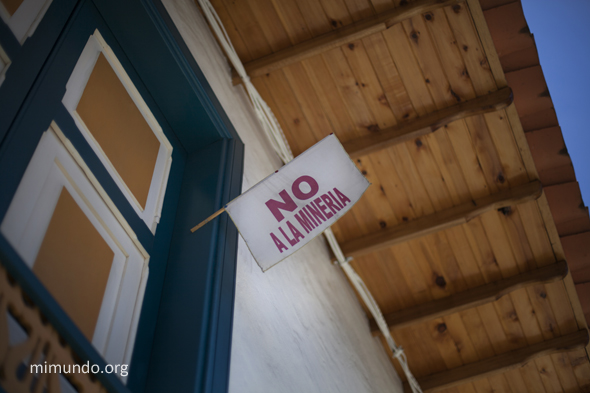 In the town of Jericó, declared a Heritage Town of Colombia in July 2013, the social tensions are clear: hundreds of homes display white flags that read “No to mining”. The town has a growing resistance to the 50,000 hectare gold mining license for exploration given in November 2012 to Minera Quebradonda, local subsidiary of South Africa-based AngloGold Ashanti. 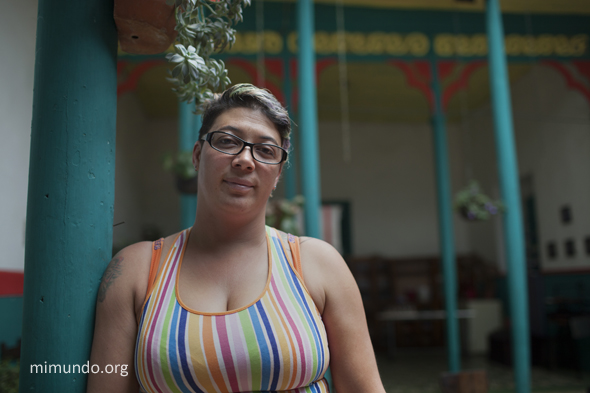 Local restaurant owner Nirvana Valencia states: “Above all, we feel attacked because no one has ever asked us if we want the mine or not!” 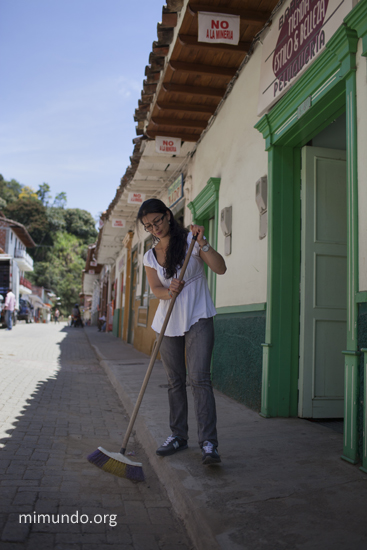 Hair salon owner Mónica Marín, 32, states: “Many of my clients are miners. Sure, I benefit now. But, what about the environment? What’s going to happen in the future? The situation is very tense right now as many are starting to support the ‘no to mining’ campaign. And those in favor are very narrow minded.” 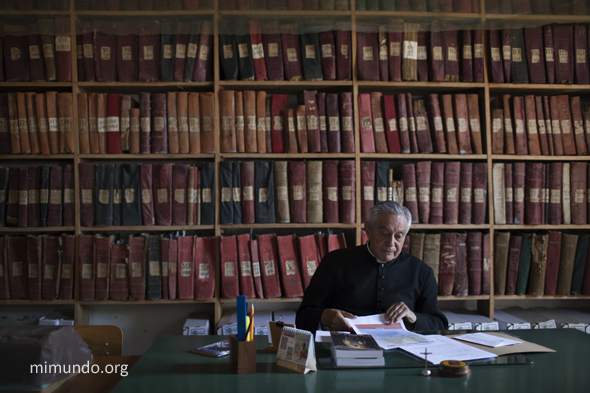 Father Nabor Suárez, president of Jerico’s History Center, states: “Here in Jericó we follow Monsignor Noel Antonio Londoño Buitrago’s stance against mining. There is a long time ecological tradition in southwest Antioquia. We may be poor, but this land has always provided for us.” 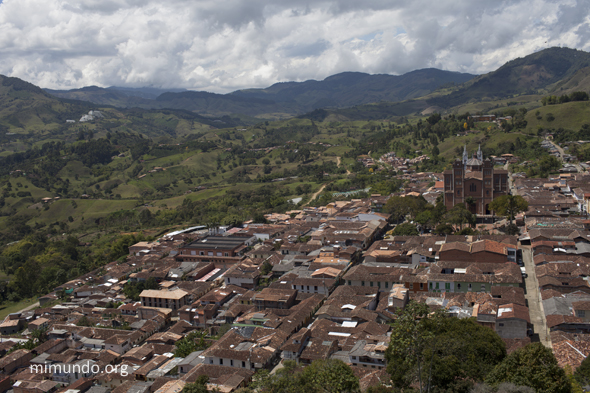 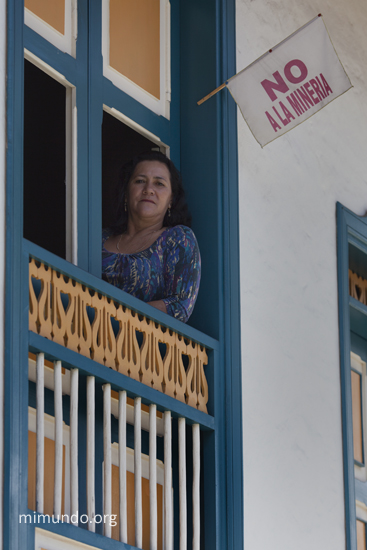 Local city councilwoman Marta Cecilia Espinoza, 50, declares: “Personally, I feel the conservation of our water and environment is the most important issue. I don’t believe a mining project can be 100% contamination free. We depend on agriculture and live relatively tranquil lives. We are worried that violence, prostitution, and other social ills will develop here as we have seen in other mining regions. Jericó is a cultural heritage town, so mining is not compatible with its status. The townspeople’s opinions are very polarized – the first serious social problem that has affected us even before any mining operations have begun.” 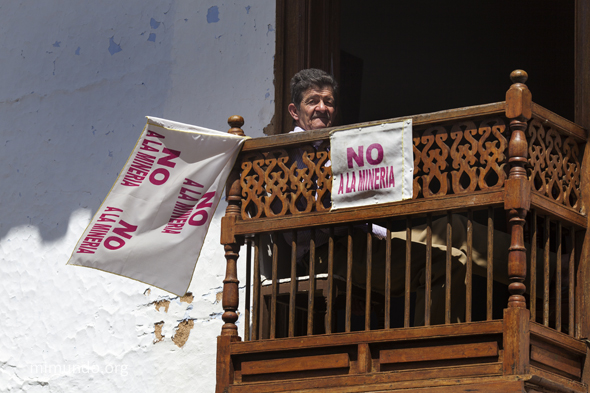 Locals who oppose the industrial project are aware of AngloGold Ashanti’s reputation worldwide. In 2011, Greenpeace awarded the mining company its Public Eye Global Award as the world’s worst company in environmental terms “for its contamination of land, and the poisoning of people in Ghana… In addition, local residents were occasionally tortured in the company’s guard house; some cases resulted in fatalities.” (3) 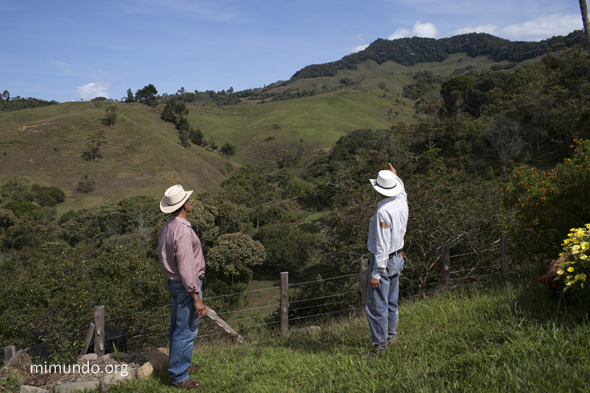 Frictions between locals and the mining company have already taken place. On September 20, 2013, residents from the rural community of Corregimiento Palo Cabildo setup a blockade into the Finca Aurora, disallowing AngoGold Ashanti vehicles from entering. Locals demanded the company to halt operations in this area of the mountainside where water springs provide water for the valleys below. The peaceful protest was quickly dispersed, but it has signaled a turning point in the locals’ relationship with the mining company. 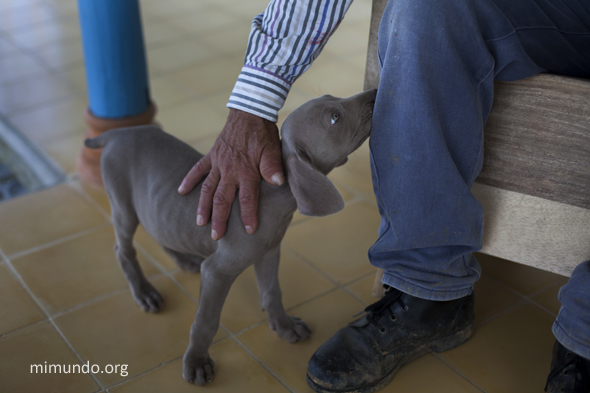 Hernando García, 63, resident of Corregimiento Palo Cabildo, states: “It is amazing how quickly things have changed in a year since the mining company arrived. This year no one wanted to work in the coffee fields unless it was for the same salary as the mine is paying its manual labor employees. Numerous crops have been lost, as we can’t find anyone to harvest them. No authority or media outlet has paid attention to us, so we decided to carry out the peaceful blockade into Minera Quebradona’s installations last September.” 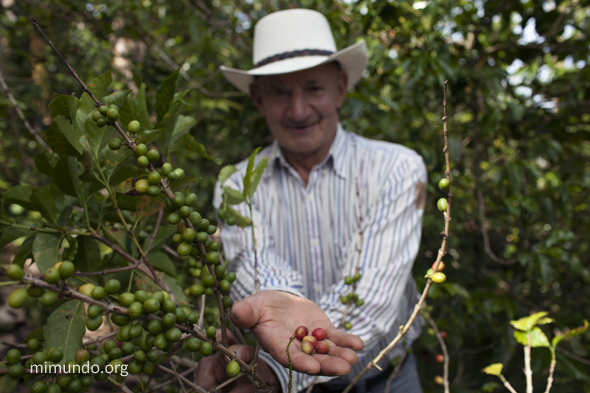 Porfirio Garcés, 74, coffee producer and resident of Corregimiento Palo Cabildo, states: “The mining company fooled us. There is a serious social division today due to this mine. This is truly a life or death issue. We want to keep our culture based on coffee production, where honesty reigns. We do not want a mining culture based on destruction.” 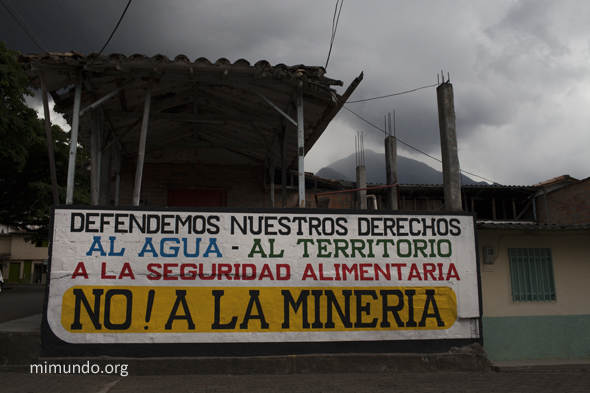 Twenty kilometers west, in the municipality of Ciudad Bolivar, locals have carried out protest marches and painted numerous anti-mining murals throughout the municipality. Diego Tobón, president of the Friends of the Arboleda Environmental Corporation (Corporación Ambiental Amigos de la Arboleda, COAMAR, in Spanish), states: “Ciudad Bolivar is a farming municipality and [the government] wants to impose a mining culture that nobody here wants.” (4) 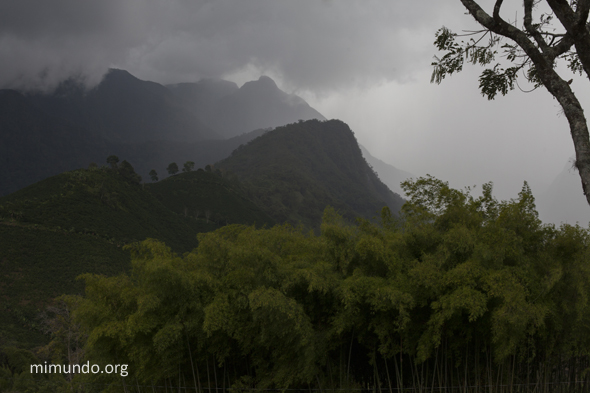 One of the main concerns in Ciudad Bolivar involves a mining license issued on the protected area of Farallones del Citará, a páramo ecosystem and major water source. Additionally, an Emberá Chamí indigenous community’s territory has also been included in the license polygon without previous consent – a direct violation of Colombia’s ratification of the International Labor Organization’s Convention 169. 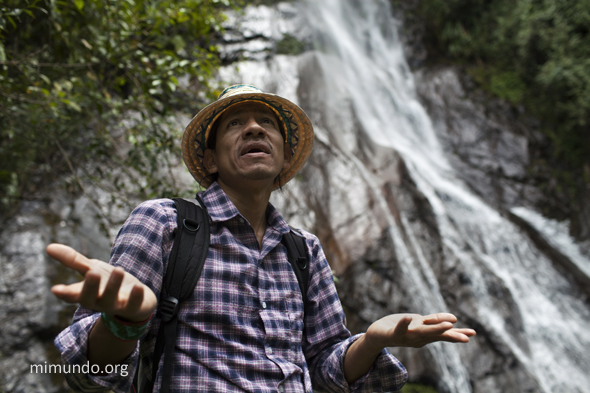 Pedro Manuel Gonzalez Tamaníz, 36, an Emberá-Chamí man from the Indigenous Community of Hermenegildo Chakiama, on the slopes of Farallones del Citará, states: “In our culture, development means more that just money, but a life plan. This plan includes a heritage for our future generations, what we leave for them. This place is full of important medicinal plants that our jaibaná (spiritual healers) can’t find anywhere else. We want to make sure our children benefit from it as well. Mining will only bring desolation and sadness.” Waterfalls are a key element in Emberá culture, as they are believed to be homes for both positive and negative spirits that help bring balance to the world. 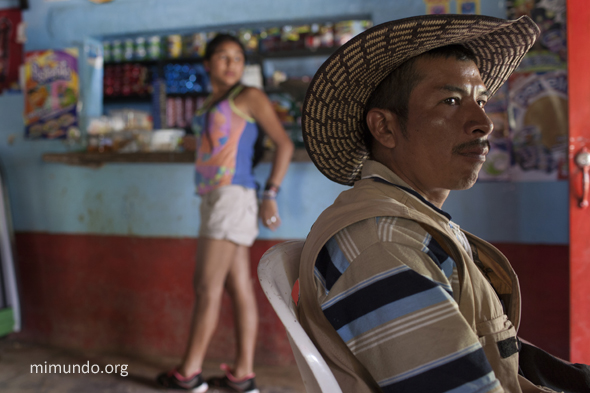 Roughly twenty kilometers south of Jericó and Ciudad Bolivar, the Emberá-Chamí Indigenous Community of Cristianía-Karmata Rua, within the municipality of Jardín, has been on high alert since an unauthorized incursion into their autonomous territory by geologists from the former National Institute for Geological Mining Research (INGEOMINAS) placed the mining problematic on the national spotlight. On September 26, 2012, Karmata Rua’s indigenous guard, a legal autonomous security force recognized by the Colombian government, captured INGEOMINAS geologist Daniel Prieto.

Daniel Prieto was retained for three days in Karmata Rua, as local leaders demanded an “explanation for his presence in their ancestral indigenous territory.” Locals are concerned segments of Karmata Rua’s territory have been included [without consent] in a hydroelectric project and/or a mining license. (5) 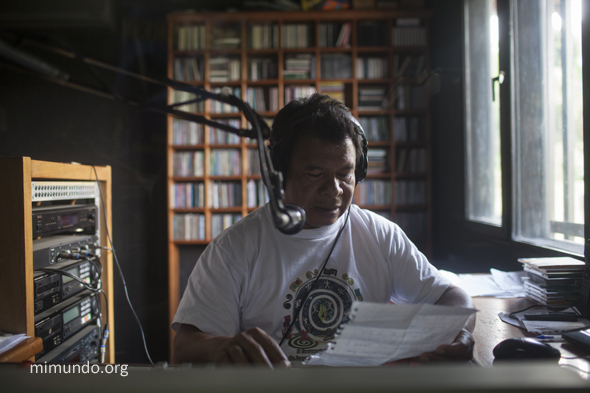 Gilberto Tascón, 52, carries out a cultural radio program from the local Chamí Estereo station in Karmata Rua. Gilberto founded the radio station in 1997, was governor of Karmata Rua, and head of the National Indigenous Organization of Colombia (ONIC) from 1982 to 1986. He states: “In the late 1970s, the community became organized not only for the sole purpose of legalizing our territory, but also for education, health, women’s rights, and our culture – the defense of our language. Mining is a threat to all these. Hence, no to mining, yes to the defense of our territory.” 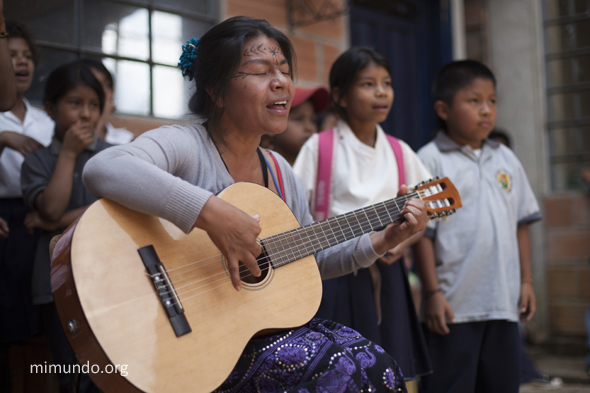 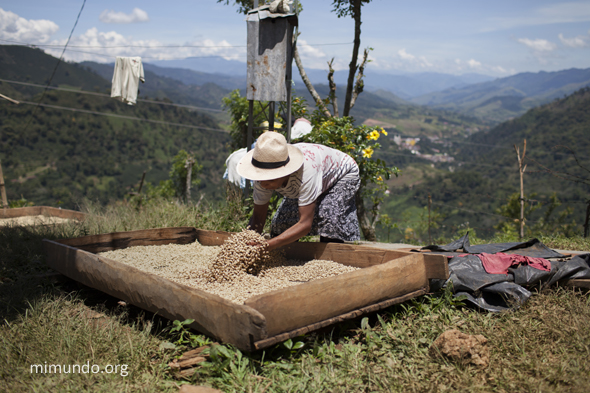 Alicia Tamanís, 60, Emberá Chamí woman and coffee grower, works on her harvest. The town of Andes can be seen in the background. 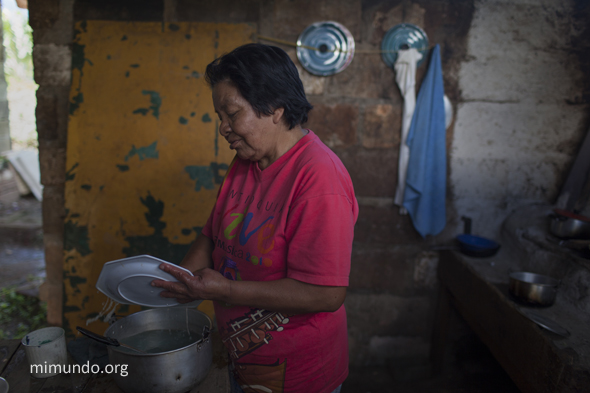 María Olga Panchí, 58, former governess of the Karmata Rua Indigenous Reserve from 1986 to 1987, was the first indigenous governess in Antioquia. She declares: “Just as we organized ourselves to recover our territory in the late 1970s, we must do so now to protect our territory. If we allow the miners to come in, where will we grow our food? Where will we go? We cannot allow this plunder. We have seen in other mining communities how the industry changes the culture. It brings drugs, prostitution. We need to cling to our culture with our teeth and nails.” 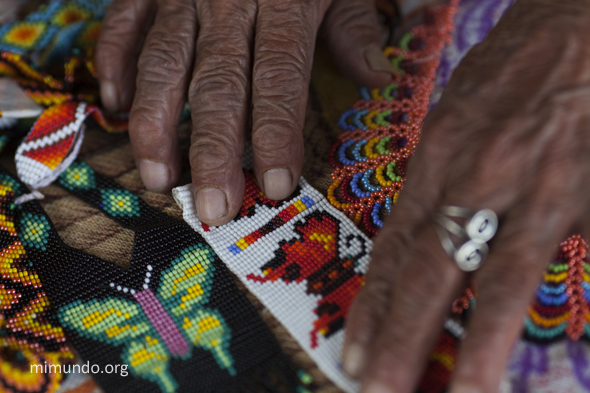 María Ofelia Carubia, 87, arranges some of the local jewelry and handicrafts she makes. 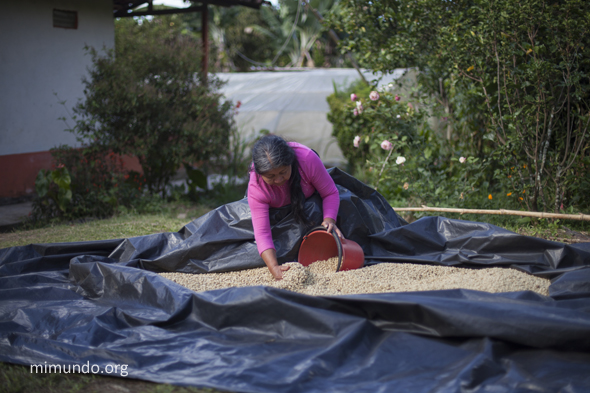 Rosa Yagarí, 65, collects her coffee harvest. With regards to mining licenses given by the Colombian government to foreign companies without previous consultation to the local population, Rosa states: “This is not a jungle, but an Indigenous Reservation. We must fight for our territory or else our children will be left without land. The foreigner who comes will find trouble. We do not mess with the local landlords either, so we want to be respected. I hope they don’t come and that the State respects our sovereignty.” 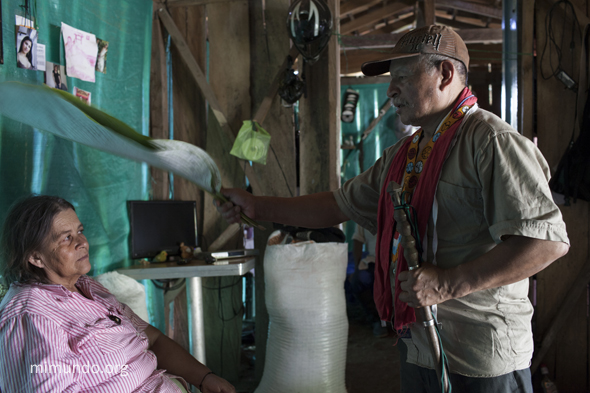 Argemio Baquiaza, 60, local jaibaná performs a healing session. The Jaibaná are equivalent to shamans or spiritual healers who control the flow of spirits according to the Emberá culture. 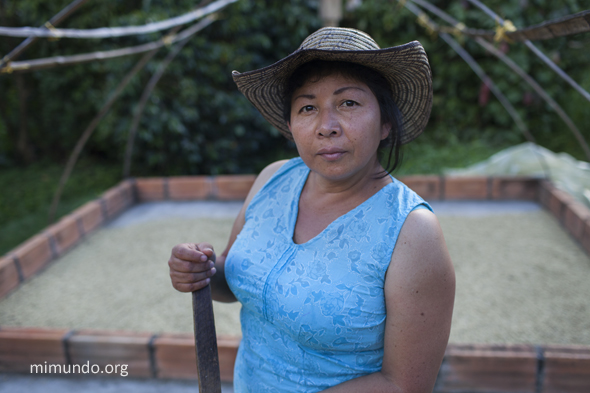 Amanda González Yagarí, 46, coffee producer and current governess of the Karmata Rua Indigenous Reserve, declares as she rakes her coffee harvest: “We are against metal mining because we have seen the deterioration of other communities at the hands of this industry. We must protect our territory in order to maintain our unity and culture. We do not want the decomposition of our family or social structures.” 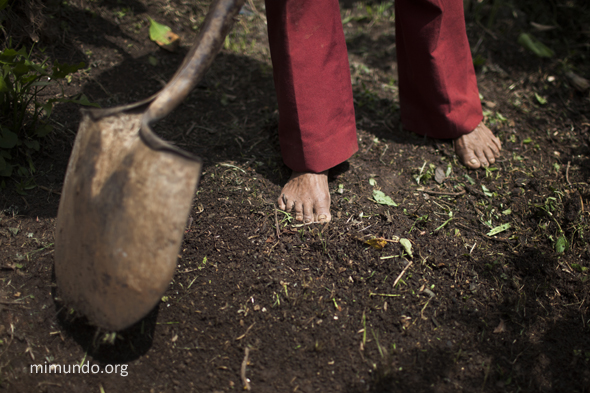 As she works on her vegetable garden, Inéz Yagarí states: “We are very worried about mining here. If they take our lands, where will we go?”